In my last post, we learned what Logistic Regression is, and how it can be used to classify flowers in the Iris Dataset. In this post we will see how Logistic Regression can be applied to social networks in order to predict future collaboration between researchers. As usual we’ll start by importing a few libraries:

The Microsoft Academic Graph (MAG) is a dataset of over 200 million papers. The dataset contains papers from thousands of conferences, journals, and institutions. The Open Academic Society provides regular snapshots of the dataset on their website. For the purpose of this post, I will be using the first one million papers found in mag_papers_0.zip. Let’s take a look at the data:

We can see that, in addition to a bunch of other data, each paper has a list of authors, each with a unique id, and a year that the paper was published. Let’s take a look at the histogram of years in our data: 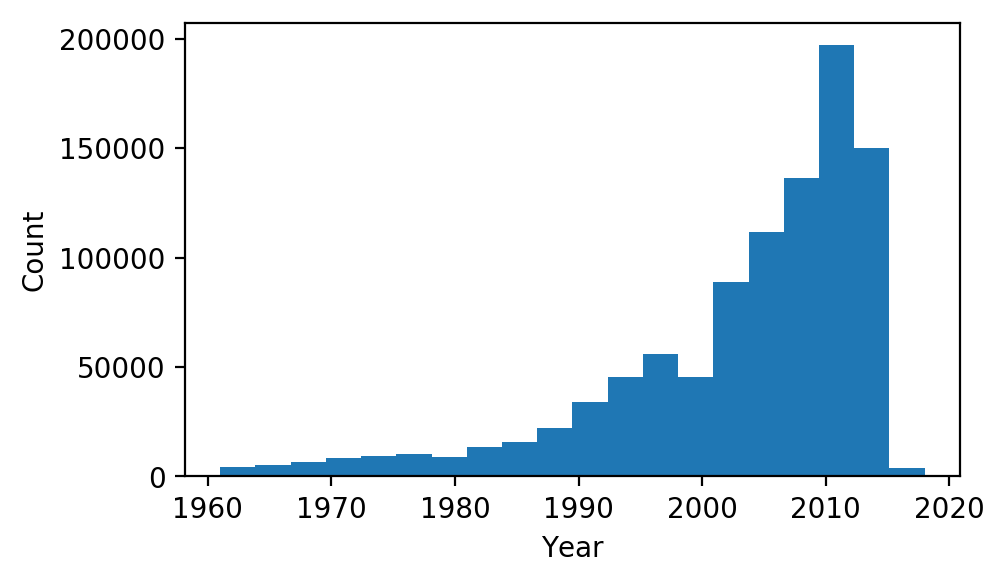 We’ll write a function to generate the network graphs from our data frame and time ranges:

Just to take a look at what we have so far, we can draw the largest subcomponent of the first graph like so: 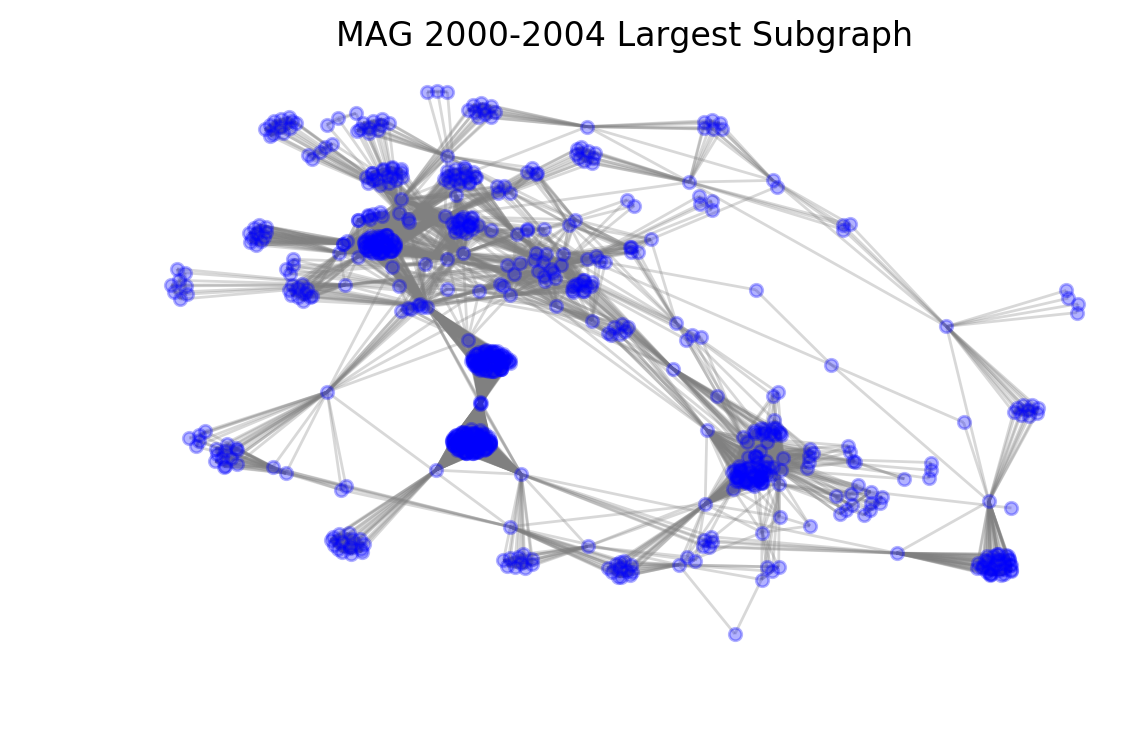 It is easy to see the clusters formed by large groups of authors that have worked together. We can also see more distant nodes that only have very few connections.

Now that we have our network graphs, we can start creating our training and test sets. Each row in the sets will represent a pair of nodes that have not collaborated. The row will be assigned a positive label if the pair ends up collaborating in the next time period, and a negative label if they don’t. Intuitively, there will be a much greater number of pairs with negative labels than positive, so we will randomly select a smaller subset of negative labels (equal to the number of positive labels found). We’ll write two functions that help us extract positively and negatively labeled pairs:

Now that we know how our training and test sets will be labeled, we have to decide what other features we want each row of the sets to contain; that is, what indicators may we add that could help our model predict future collaboration? We will pick a few algorithms commonly used in social network analysis:

Our first feature will simply be the number of neighbors that a given pair of nodes share. This can be represented mathematically like so:

Where $u$ and $v$ are both nodes, and $N(v)$ denotes the set the of all neighbors of node $v$. Common Neighbors was chosen as a feature under the assumption that two authors that share a large number of co-authors may have a higher chance of working together in the future.

Two nodes that have a high Jaccard Coefficient have very similar neighbors, which might be a good indication for future collaboration.

Introduced in 2009 by Tao Zhou, Linyuan Lu, and Yi-Cheng Zhang in Predicting Missing Links via Local Information, the Resource Allocation algorithm is defined as:

The idea behind the resource allocation algorithm is that if many of the common neighbors between $u$ and $v$ have a low number of neighbors themselves, any “resources” sent from $u$ have a high likelihood of making their way to $v$ and vice versa.

Preferential Attachment is simply the product of the size of each node’s neighbor set:

Two nodes that both have high numbers of neighbors, regardless of their commonality, may have a greater chance of collaboration in the future.

Since the library we are using for network graph computation, NetworkX, has all of the above functions built in, we can generate all of our features for a given pair like so:

Now we have everything we need to create our training and test sets:

Let’s look at the training set:

We can see that, as expected, each row has a label, and all of the features we wanted. Now we’re ready to train!

We’ll start by splitting our datasets into inputs and labels:

Just like in the last post, we’ll have to normalize the data so it works well with logistic regression:

Now we could use the logistic regression code I wrote in my last post, but the scikit-learn library has an implementation that is slightly more efficient, which will be much faster on our large dataset. Here is how we can use it to fit a model to our training data:

Now that we have the model fit, we can check the mean accuracy with our test set:

Area Under the Curve

Although the model seems to have an almost 94% accuracy in the test set, accuracy is not best metric to use. Both our training and test sets are balanced with an equal number of negative and positive samples, which means that a model predicting positive every time would still have an accuracy of 50%. A better measure of performance of a classification model is known as Area Under the Receiver Operating Characteristics, or AUROC.

The Receiver Operating Characteristics (ROC) curve is measure of a binary classifier’s ability to distinguish classes. The ROC curve drawn by plotting the True Positive Rate (TPR) against the False Positive Rate (FPR), each defined below, at different thresholds.

We can plot our ROC curve using scikit-learn like so:

By using our trained model on data collected from 2005 to 2009, we were able to predict whether a pair of authors would become co-authors in 2010 to 2014 with an AUC of 0.98! A model like this could be used as an application to suggest researchers to work with in the future. In addition, similar techniques could be used across different social networks to suggest friends on Facebook, or connections on LinkedIn, etc.

There are also a number of ways the above model could be improved. All of the features currently being used are based off of neighbors of nodes formed by co-authorship. More features could be added relating to common paper topics or institutions. In addition, the logistic regression model could be replaced with support-vector machines, or a neural network to improve accuracy.

If you liked this article, be sure to follow @teddykoker, and check out my other articles.